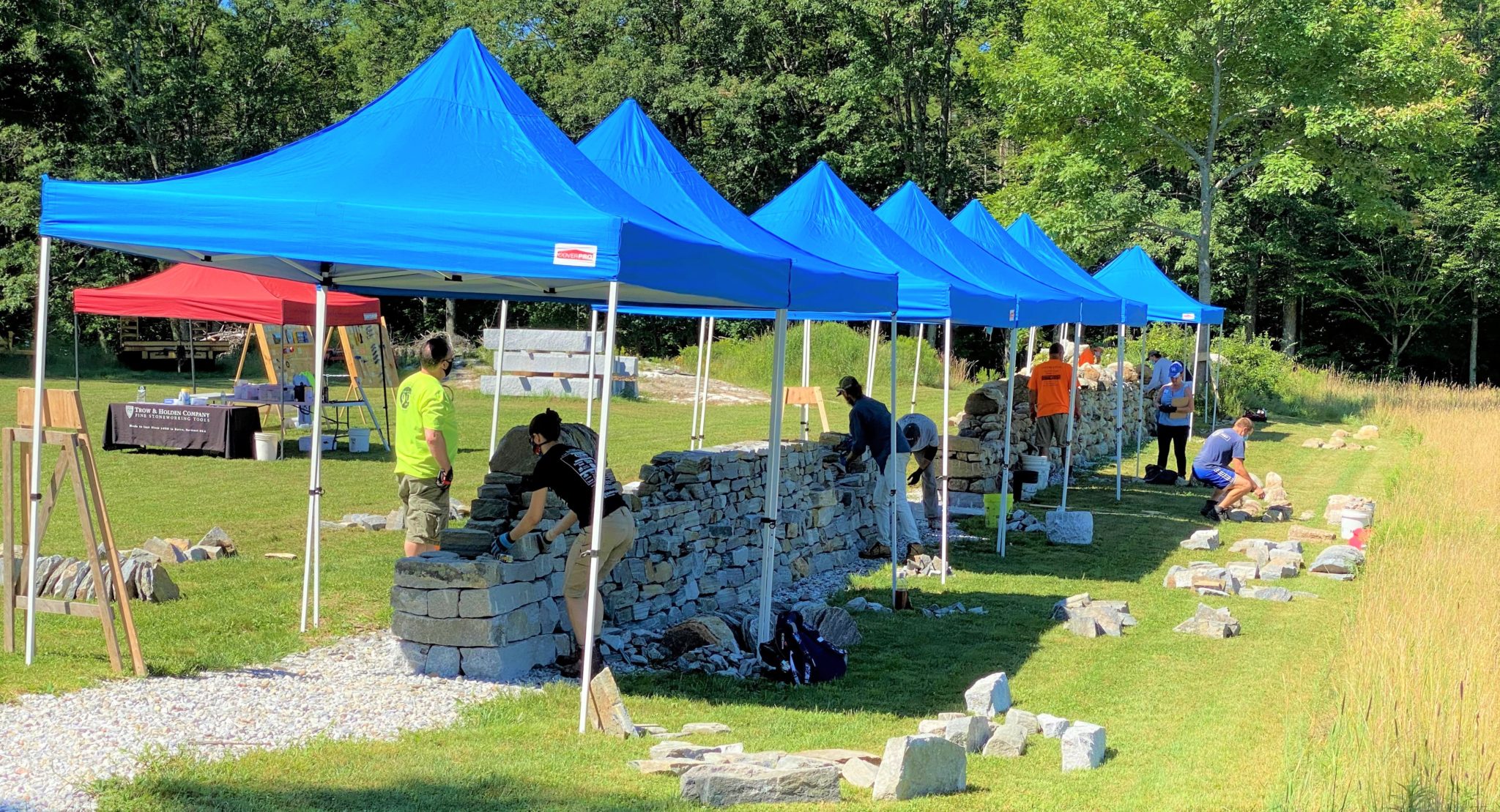 Participants in last weekend’s workshops came with a range of motivations and brought a diversity of experience. Joe, Ken,  Andrea, and Steve all came to the 2-Day Intro as beginning wallers seeking formal instruction. Some of them brought a degree of experience gleaned from projects at home. One learned from a father-in-law who had built drystone dams during World War II. The horse farmer aspires to build tall, freestanding double-face walls, putting to use the quantity of stone naturally available on  the land to screen out the traffic from a recently widened road. Each participant arrives with their own plan for incorporating drystone work into their future. At least one aspires to achieve Level 1 certification on a test day in September.

At the same time these four participants were practicing the basics of building a drystone wall, four others focused on cheek ends. Peter was back for his third workshop since 2018. Already he had added stone shaping to his skill set. This time he came for hands-on exposure to building a square end to a wall. Later in the fall, he adds flagging to his repertoire.

Landscapers Mollie and George had both learned the basics at our Intro/Contractors Intro in July. This time they came to learn a fundamental skill: how to  build a freestanding vertical wall end. In their professional work, they will certainly leverage this skill in many features they each build in the future. Mollie and George brought different levels of experience to the Cheek End workshop, one new to the field the other with twenty years under his belt. Both will test for Level 1 certification come September.

Ben, too, brought twenty years of walling to the workshop, having learned from his father. He builds both professionally and for pleasure, although he spends the bulk of his year teaching principles of science and mathematics to high school students. He plans to build several more cheek ends before he tests for Level 2 Intermediate certification next spring.

Pete Ryder, Andras Lazar, and Ron Neil taught with their collective experience as professional wallers and Stone Trust instructors during two beautiful days in Mont Vernon, New Hampshire. Meet them and/or other certified instructors at upcoming 2-Day Introduction to Dry Stone Walling workshops in late August and late September. If you’re ready to ponder what to do when a wall comes to an end, join us instead for August 28 & 29 or September 19 & 20 Cheek Rebuild.