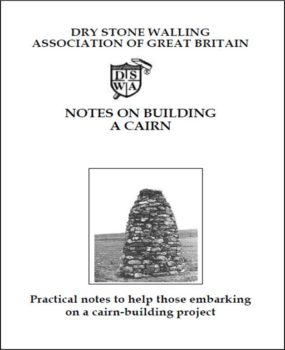 The Dry Stone Walling Association is grateful to Dave Goulder, Master Craftsman from Lairg, Sutherland, for preparing these humorous notes as sound advice to dykers.

POSITION: Always seems to be on top of a hill. Unlike hill dykes where stone is traditionally brought down to the site, the materials for a cairn have to be transported UP the hill. These days it is unreasonable to expect any builder to cart stone uphill using biceps and boot leather, so some form of vehicle is required. This can involve covering long distances over trackless country, so it’s quite important to get this right before putting in the final quotation for the job. You may even need the services of a helicopter – it has been known!

ESTIMATING MATERIALS: “Oh dear. Let’s see, is it seven or nine feet across the base? How high will it be? What will the batter be? Shall we just keep building and see where we finish up? If, fifteen feet is too high, well we’d better reduce the base diameter or it’ll look like a giant cow-pat from the road.”

A real minefield as you can see. A pillar will be the same proportions all the way up, and the height will be specified, so estimating the amount of stone required will be simpler than guessing something that vaguely tapers to an uncertain height. In my own limited experience of cairn building, I’ve found that the customer can’t say exactly what he/she has in mind, and any suggestions from the builder are very welcome. “About twice as high as me, and narrow. You know what I mean.” I recommend getting them to supply a sketch with rough dimensions so that you DO know what they mean, then bring in far more stone than you actually require for, as you approach half-way and the curve gets tighter, you will need to be more choosy over each stone used. Check if the customer wants a plaque inserting in the stone work – or you may be heartbroken later!

BASE: Use a line and pin to draw your circle.

FOUNDATION: Most cairn sites will be on exposed bedrock, or very sparse covering on a firm base. If the ground is not hard, it is important to excavate deep enough to be able to place a firm base. The concentrated weight on the site will be considerable, and a scarcement beyond the first course is advised.

FIRST COURSE: As with a round pillar, the largest stones are placed end out around the circle, the wider end to the outside. The hearting space will be enormous, offering a golden opportunity to rid yourself of cannonballs, dog’s bottoms, and dinosaur heads!

UPWARDS, EVER UPWARDS: With the first course in place and hearted, pause to admire it: it will never look this good again! A tepee-like frame can be constructed with rods and lines, coming together at the top, but by the time you get to the third course you’ll curse it. By the fifth course you’ll have smashed it to pieces and hurled the debris into the abyss (EVERY good cairn site should have an abyss)! It gets in the way.

I’ve found it better in every way just to use the eye. Build slowly; walk around it and view it from every direction. If there’s a “flat” spot, you’ll see it likewise a bulge will be spotted easily. I know that some builders use a rod down the centre of the cairn and just a single line from the top, taking it round and round as the courses are placed. This certainly works, but the rod has to be left inside, and this particular builder feels it’s a slur on his masculinity to be seen Maypole dancing!

THE GIDDY HEIGHTS: As stated above, the circle becomes tighter with every course, and triangular stones are obligatory as you approach the top of the cone. Also, space is now very limited. Scaffolding is handy, though not practical on many sites. I use two ladders, and swap the “toetectors” for a pair of rockclimbing boots. It’s a good feeling to climb your own cairn, and you certainly discover how well you’ve built it.

A FLAT CAP OR A BOWLER: What to put on top. Well, obviously one big stone rather than lots of wee ones. But can you find the ideal “topper”? I covered the entire farm looking for the right stone, and of course, ended up with a compromise. Having found it, I now had to place it on the top. I found a friendly tractor driver with a front-loading bucket and returned to the cairn while he grappled with the stone. A tip here: if a driver says he has a front loader it’s a good idea to find out what kind of loader it is. The Health & Safety man would have had to have been sedated if he could have seen me sliding a huge flat stone up two yard-long steel spikes on a loose bucket thirteen feet up in the air. The result could easily have been one kebabbed dyker.

FINAL APPRAISAL: The old rule about the end product being the sum of its parts certainly applies to cairns. It can only be as good as the materials supplied, and like arches, pillars, etc., the builder is always going to see some part that would have been tidier-looking had there been a better choice of stone. But surely this is where the craft comes into it’s own. Any builder or mason can create a fine structure using good, flat or block stone, but to do it with a heap of dog’s heads and highwayman’s hats takes REAL SKILL.

These notes are intended for the working dyker or waller although those considering the commissioning of cairns may find them helpful. The Association produces a range of leaflets and books to help those interested in all aspects of the craft. Full details are available on receipt of a stamped, self-addressed envelope.

FURTHER INFORMATION
The Association endeavours to respond to all requests for specific information regarding dry stone wailing. The DSWA offers a mail order service on books, which includes a number of technical manuals, which would make useful reading, and produces a register of working wallers, which is free of charge. Full details available on request (please include a stamped, self-addressed envelope).