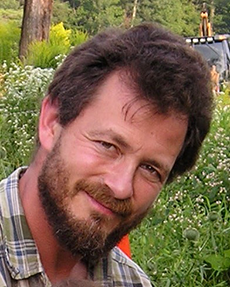 MICHAEL WEITZNER has been a full-time dry stone waller/mason and a professional member of the Dry Stone Walling Association of Great Britain since 1993.  In 2003 the DSWA-GB awarded him a Master Craftsman certificate.  Michael has a strong interest in historic preservation and has become involved in historic bridge preservation.

Michael was born in Switzerland in 1962 and has lived in Spain, England, Scotland and the USA.  Michael’s involvement with dry stone began at an early age when he was introduced to it by his Swiss grandfather.  Michael’s work has been featured in New Old House magazine, Vermont Life magazine, ‘Good Fences’ by Bill Hubbell and on HGTV’s Rebecca’s Garden. Michael lives in Brattleboro, Vermont.