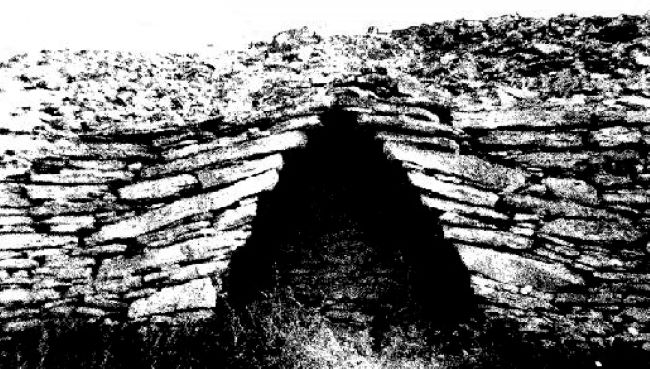 This Master Class article originally appeared in the Autumn 2010 issue of Stonechat, produced by the North Wales Branch of the Dry Stone Walling Association of Great Britain.  This entire issue of Stonechat, and many more, are available at http://www.dswales.org.uk/Stonechat.html

Last time we saw how with given uniform stone (or playing cards/dvd boxes!) a dome can be formed according to a neat formula, the main point of which is that initially you can only extend the stone a fraction beyond that below it, increasing this dramatically as you reach the apex. In addition we noted how cantilevering can add to stability, or at least enable you to project stones a little more. I seem to remember saying there would be little theory this time, well it was a porky. Space is limited and so I’ll deal with a couple more aspects this time before running over to a third installment.

In reality stone size varies and so you will have longer and shorter stones. One of the few references I have found to corbelling in my library states “start with the shorter stones first, progressively increasing the length of the stones as the span grows; in this way part of the corbel will always remain over the main stonework support” 1. I have thought long and hard about this, whilst essentially intuitive I’m not sure it has fully grasped the technicalities of corbelling. Unless the stones are enormously long the span must be very short, the whole point of corbelling as we saw last time is that you can completely overhang the ‘stonework support’. Then there is the idea of using long stone first… I’m not entirely sure about this. Last time we established that the lower stones can only be projected by a relatively small amount compared to their length. Setting aside the effect of cantilevering for the moment, if we have a 60cm stone at a point where we can project it by 1/20th of its length then we can project it 3cm at the same point we can project a 30cm stone 1.5cm, this does not gain much. Higher up where for example we can project it 1/6th of its length this is 10cm and 5cm respectively. In terms of closing the gap efficiently it might be better higher up. That said the overlaps lower down can be relatively small, (with or without cantilevering) so using longer stone here and cantilevering them might be advantageous. Basically if you are going to project a stone further than you ideally should, relying on cantilevering, then longer stones earlier might be a good idea as all other things being equal they will be more secure. As with many things dry stone it becomes a case of swings and roundabouts, it is also going to be influenced by the shape of the ‘dome’ – poke long stones out lower down and rely on shorter stones higher up will lead to a more triangular interior, and would be the best approach if this was the desired outcome.

Christian Lassure in Stonechat 21 and in “Building a Drystone Hut”2 suggests that the corbelled stones should be set at an angle of 15° in order to shed water. My first reaction to this was that this sounds a little excessive, I calculated that for a 30cm stone (length into wall) it suggests the back is raised a shade under 8cm, for a 20cm stone a shade over 5cm, basically it’s a bit steeper than 1:4. I have consulted with several Master Craftsmen who have occasion to build ‘watershot’ or ‘weathershot’, that is with the stones set with a slight tilt down towards the outside, they all confirmed it’s only a slight slope and as Andy Mason says they only require “a very slight slope on as it does not take much to disperse water”. It should be noted that for tiled buildings roof pitches are usually 15º or more as at shallower angles there is increased risk of wind blowing moisture back up under the tiles. However I would not have thought that on the internal skin of a corbelled roof that this is likely to be a huge problem.

Back to the playing cards. They prove a little difficult to get the slope right with, DVD boxes are easier but they are a little slippery and within this analysis friction plays a role. As it happens I did have a pile of roofing slates ready to hand.

Sadly roofing slates are not quite as regular as they look, a slight discrepancy in their thickness from one end to the other was enough to skew my experiment! House bricks, much more interesting. You would expect that putting a slope on would actually in effect act to some extent as a counterbalance to the overhang. The mass of the stone without an overhang but with a slope, is trying to move down in the direction of the slope. I was able (somewhat unscientifically) to extend a brick a little more than ½ cm beyond its centre between 5 and 10% more than I could on the flat. Not a lot, but enough that in 3 bricks the top brick is more or less beyond the base (when viewed from right angles to the axis of the brick).

The more you slope the stone the more you can overhang them. However the margins are small – experiments with around 11-12º suggested very little difference and if you start increasing the slope you are going to reach a point where the stones start to slip. The surface contact between slates or bricks was good, hence there was good friction. In practice stone contact is going to be poorer and hence so is friction. The amount at which you can slope them will thus be limited, any grit/small particles will act like ball bearings and have a far more detrimental effect than they would have when flat laid. I was however surprised at how secure the slates seemed with 15° of slope.

I have queried the slope with Christian Lassure who says “Regarding the outward slant in the corbelled stones of agricultural “cabanes”, I can tell you

from my own personal observation that a slight inclination is the rule and not the exception, whether the ground plan is square, rectangular or circular. Now a 15° degree slant is a rough estimate as there has never been any systematic measuring of the angle on any number of corbelled vaults. Nevertheless, the outward inclination is a distinguishing feature of modern agricultural dry stone corbelled huts (as opposed to the buried “tas-de-charge” vaults of ancient tholos tombs, in which stones are laid horizontally).”

Once a structure is built it is difficult to tell how the stones are angled. However the photo (above left) of a corbelled triangle does show the stones inclined by around 15°. In this instance I am no sure that weatherproofing is a concern, but overall I think it fair to conclude that in terms of weatherproofing and structure some slope is required and it may well be as much as 15°, but it does mean a potential inherent weakness vis-à-vis flat laid, is built in. It should also be noted that technically the slope moves the pivot point closer to the origin and so you do need to be able to project each stone more than if they were laid flat in order to close the gap at the same rate. With the bricks the photo shows it actually takes 4/5 bricks to extend beyond the lower pivot point, more or less the same as it would if they were flat. Basically the greater the slope and the thicker the stone the more you need to project the stones. My calculations suggests the pivot point ‘regresses’ by about ¼ of it’s thickness. Thin stone is thus theoretically more effective, and you shouldn’t have to worry about strength since the majority of overlaps are very small, although as we shall see  it might not be that simple.

The diagram hopefully illustrates this phenomenon. It is based on the principle of /2+1/4+1/6+1/8+…+1/2n outlined in “Stonechat 21” so no allowance has been made for the increased extension on the sloped examples. There are likely to be all sorts of implications I don’t have space (or brainpower at present) to investigate. For example whilst thicker stones ‘regress’ more so the back corner regresses more than a thin stone, this means the centre of balance regresses more than thinner stones which means the percentage increase you can project them increases. For example with the bricks it would not be long before the ¼ thickness regression exceeds the theoretical ability to poke them out bricks are around 220mm long and 65mmm thick so regress by around 16mm per brick. 16mm is about a fourteenth of its length which according to the step formula means after 7 bricks we’d be going backwards without the increment due to the slope even at 10% we’d be going backwards after 1 more which clearly wouldn’t be the actual case. Playing with bricks and various angles suggested the overall overhang in 5 bricks varied very little in. But then it was hardly a rigorous experiment. Something to file away for future thought. Be warned.

Thanks to numerous wallers who have been kind enough to respond to my queries on sloping stones….