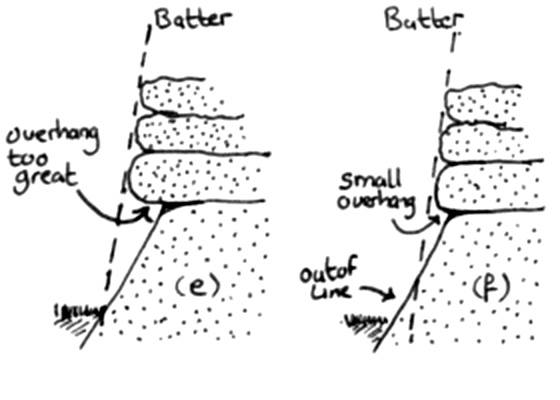 This Master Class article originally appeared in the September 1994 issue of Stonechat, produced by the North Wales Branch of the Dry Stone Walling Association of Great Brittan.

In the last two Master Classes we have looked at the basic principles involved in building foundations with reasonably regular shaped stone, and how to deal with essentially tr95iangular stones. In this, the third and final part, line and hatter and a North Wales speciality, vertical stones, are dealt with.

Ideally foundation stones should have a bare minimum of wedging beneath them – lots of wedges and then these are effectively the foundations. Hence it is not always possible to get the face of the stone to exactly fit the hatter (slope of face) of a wall.

There are essentially two different approaches to solving this problem, as shown by (c) (d) above.

Opinion differs over the acceptability of either method since ideally no stone should protrude from a wall (c) and foundations should provide a solid base for subsequent building without overhanging stone (d).

I generally prefer (d), provided the slope is not too great. It should be possible to place a suitable stone on this, running well into the wall. This is essentially the same as the method employed for “traced’ foundations as seen in part 1. With longer slopes this becomes more difficult as the overhang is necessarily greater.

So why not poke it out of the wall? I frequently do and I am not convinced that there is any real reason beyond the fact that, (dependent largely on individual taste) it can look sloppy. If this is the most solid method for utilizing a stone then this criticism is hardly a capital offense. The stone has got to be used somewhere and somehow. Unlike stone protruding higher in the wall i is not going to provide much of a springboard for marauding sheep to vault the wall. There is risk of a tractors driving over protruding foundations, hut this is more a matter of degree and i’ is going to take a very determined tractor driver to go over slightly protruding ones (with longer slopes you could always combine methods (c) & (d) to minimize or reduce the risk) without crashing into the wall anyway!

With larger stones with sloping faces use of method (d) otter creates an overhang too great for subsequent building (e).

Placing the stone so that its top would tend to he in line with the correct batter of the wall (Method (c)) means the stone will be poking out quite a lot, which given its height exacerbates any apparent “untidiness”. This can be minimized by placing the stone so that it combines methods (c) & (d) as in (1). It is all a question of compromise and perhaps taste. No solution is ideal but something has to be done.

Large stones with good faces which do not follow the batter should he aligned so that the top of the stone is in the correct place for the batter at that point (g). The key with larger stones is to have your line high enough so that it is at (or slightly above) the tops of the stones. All too often inexperienced wailers have the line low down and butt the foundation to it (h) As the top of the stone is above the line it cannot be in the right place if the wall is battered. The result is an unacceptable step (or bulge if the subsequent building stones are placed to the edge of the top at the foundation), definitely providing purchase for errant, vaulting, sheep.

Again either solution (i) or (ii) could be acceptable, subject to the same problems and reservations as for sloping faces. There can he no prescribed solution and I can only emphasis it is all a question at degree: how severe the slope/irregularity is and how best it can be placed for subsequent building. There is no ideal solution; each stone will have different implications. Experience probably helps in coming to the ‘correct’ decision, but that’s not a lot of help until you have it. Remember, as with any other foundation stone, it needs to he solid and you need to be able to build on it solidly. if you can’t take it out and try again!

Vertical foundation stones are a no-no. They are highly unstable and every foundation stone must be sitting on its largest surface, never ever stood on end. Ideally you will he able to drop them down onto a larger surface and progress as normal from there. Well at least that’s the theory and should be the first approach. However things are not quite that simple in the real world, especially this corner of it, even if we avoid arguments about maintaining local styles.

If the vertical stone is dropped it must either he the exact width of the base of the wall, or leave sufficient space to build the opposite foundations sufficiently well. Unfortunately they are sometimes too long and poke out, or – more often than not, not quite long enough and thus impossible to build around. They are also very often such ridiculous shapes that anything other than standing them is too great a nightmare to contemplate.

Another consideration is that dropping the stone effectively reduces your supply of building stone and increases the available hearting (i.e. the stone now provides less of the face of the wall and more at its middle). In order to regain height some of the hearting will have to he used for building? which is not always the ideal solution.

So beyond giving up and going home you are likely to be faced with having to re-site the stone as it was. In such circumstances the following approach should he adopted.

Dig the stone well in, the deeper the better preferably about half way (or more!!). The deeper you go, the greater the reduction in the chance ox the stone being pushed over out of the wall, (leverage). Slightly slope the stone into the wall (as you might do for a sloping face), as this means the weight of the stone is leaning into the wall and thus less likely to fall or be pushed out. Firmly wedge the base of the stone in the hole so that it is very solidly held. Make sure the opposite foundations utilize the available space as fully as possible, as it you were dealing with a traced stone (part I).

Ensure good, solid well hearted construction of the opposite face of the wall. Use good tie stones to hold the top of the stone in place as securely as possible.

A vertical foundation store is a severe weakness If it has to lie done – and it should really be avoided – then this weakness should lie compensated for as much as possible with very sound. solid construction all around it.

This is true of much random dry stone walling from the foundations through to the coping, especially given the myriad of stone types and shapes in North Wales where the ideal can be virtually unattainable.

It has taken three editions to deal with foundations? I’d like to think with good cause. They literally provide the foundation to good walling practice. The rest of the wall should be built with the same principles and problems solved in essentially the same ways (except building stone would never he laid on end or out of line) with adaptations according to stone type.

But more of this next time!

Sign up for the Stone Trust's Monthly Email Newsletter

The Stone Trust sends out an email newsletter one a month with updates on workshops, events, and news of The Stone Trust.  Find out about special deals and stay up to date in the world of dry stone walling, all in just one email per month!  Click here for the archive of our past newsletters!  So much to see and read.

Note after signing up you will get an automated email contianing a confirmation link which you must click in order to be added to the list!  If you don’t receive this email you may have miss-typed your email, so please try again.