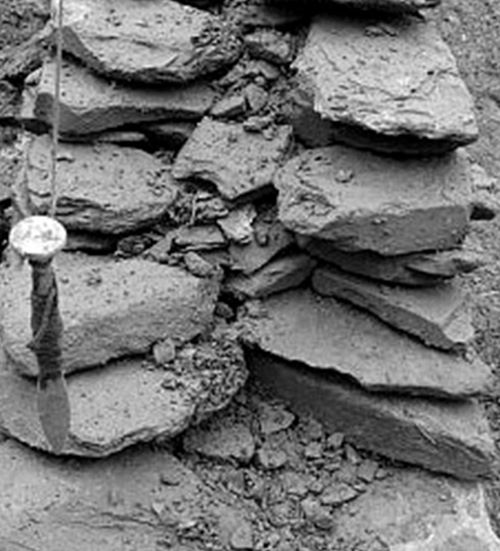 This Master Class article originally appeared in the Autumn 2011 issue of Stonechat, produced by the North Wales Branch of the Dry Stone Walling Association of Great Brittan.  This entire issue of Stonechat, and many more, are available at http://www.dswales.org.uk/Stonechat.html

Space dictates that this edition is really only an extended “Rogues Gallery”. I sometimes worry that masterclass overcomplicates matters, especially when I go off on one of my theoretical jaunts. So it is with some trepidation that I think it’s time to deal with hearting, surely there’s nothing to it.

On courses trainers seem to really emphasise the importance of hearting and I suppose the reasons for that should be fairly obvious, however just to recap. When we build a wall with everything we do we are essentially striving for 3 related goals. The first is should be somewhat obvious – that it stands up. In the short term that is fairly easy to achieve, however practices have to vary slightly to make walls something more than ephemeral. That is where the second goal comes in. Walls settle and move, they cannot escape the effects of gravity (inter alia) and so techniques have to be adjusted/developed to control this movement, reducing the potential for it (e.g. tightness) and then the third goal, controlling it when it happens (e.g. length in). At times I think this third goal gets forgotten.

The first principle with hearting is that you should aim to use one stone per gap/void. This is of course not always practical! This does not mean you shouldn’t aim for it and so if you can’t use one stone then use as few as possible. This in turn means if you have a big hole, use a big stone first, or if you are filling a gap on the inside edges of two face stones find a stone the right shape to fit. The fewer the pieces of hearting the fewer the potential moving parts during settlement.

This is one reason that filling the voids with lots of small hearting is not a good idea. At this year’s Cumbria “wallathon” where speed often seemed to be the over-riding principle, there was an alarming tendency for participants to shovel up slate waste (down to fines) into buckets and pour the ‘hearting’ into the wall.

When confronted, the justification was that it was filling the middle really well and the wall was obviously solid. But what about the long term? Based on the idea of controlling movement through limiting the moving parts idea this is potentially problematic. You could argue that you are leaving fewer voids into which the hearting (or building stone) can settle, but it seems possible that in the long run 100 small pieces could be more likely to settle than 3 reasonably fitted lumps (think slabs sitting on uncompacted sand vis 3 or 4 stones). Another consideration is the ‘ball bearing effect’ and the aphorism “gravel travels”. In the long term smaller (and more rounded) fill is more likely to speed up movement (certainly compared to chunky, angular fill), quite the opposite to the idea that we will control this movement. For these reasons river gravel in particular makes really poor hearting. I was once taking a recently rebuilt wall packed with river rounded, small, stone when I knocked one building stone, the wall literally cascaded down. It occurred to me that in the long term the wall might actually have been better off had the hearting been less well packed and the suitable stone not supplemented by the rounded, but don’t quote me!

In Cumbria as far as shovelling and fines are concerned, one argument that was put to me is that you do get earth filled walls (such as cloddiau) and it does them no obvious harm. They are however a different kettle of fish, earth banks protected by a stone skin, rather than a stone skin filled with soil. The stone structure tends to be different and they are wide enough that the soil is very well compacted – nigh on impossible in a dry stone wall. In its way, and if constructed (compacted) properly, the soil binds and coalesces in a way gravel cannot.

So what size is acceptable? There is another aphorism which applies to this, but which is perhaps not quite suitable for these pages. Basically it suggests that if you can fit a piece of hearting in your mouth it’s too small. In the interests of scientific walling… Contrary to what many think in my case this is actually quite remarkably small. I wondered how representative this was but Brenda for some reason decided that her contribution to all things walling did not go quite that far. It could all be some sort of Chinese whispery urban myth wotsit, but if you’ve got to start somewhere…

Then there’s the question of how soon in the build you should be using it? The ‘one stone per hole’ stricture applies throughout. Consequently my thoughts are the less small bits there are near the bottom the better. It is generally acceptable to place large stones and then fill the nooks and crannies. One common approach is to level the hearting, but if you do you should (logically) avoid a complete layer of smaller pieces just to get it flat. Often filling a small dip (rather than a gap) just means you will not be able to fit a bigger piece later.

As with all aspects of walling there is usually room for improvement on what you have done. So how can we heart a wall better? I would suggest that once you have ensured all the gaps under the tail of the building stones are filled (with as few stones as practically possible) you should then always work from the outside to the inside. Start with any gaps between adjacent building stones, then ensure that you heart tight up to the backs of the building stones. You will frequently have wedged the tail of a building stone to hold it secure. It is an often forgotten aspect of hearting that one of its roles is to reduce the potential for these wedges to move, once again controlling/ reducing the potential for the wall to settle.

There are other, more obscure aspects you should consider, which supplement well fitted packing. Hearting should arguably be set as level/flat as possible. A good reason for not just pouring/chucking it in. Accepting that the wall/hearting will settle, then this ensures it settles as evenly as possible, theoretically reducing the potential for the creation of voids – the more voids the greater the potential for movement. In addition hearting should ideally be set length in, just as building stones – i.e. at right angles to the line. Again this is to reduce/control movement. It is more of concern in filling larger voids or where you have to deal with a structural weakness/problem (such as tree roots), where you are more likely to adopt a ‘belt and braces’ approach to building. It is also likely to be secondary to size. If you have face stones on opposite sides of the wall stretching towards the centre but leaving a 5cm gap which runs 15 cm along the wall you might well be better advised to run one piece of hearting along rather than 3 or 4 shorter pieces across. These aspects can contribute to better hearting but they are not the be all and end all.

Just because it’s hidden away the importance of hearting should not be underestimated. Just to get a little theoretical, back in “Stonechat No.19” (Summer 2009) we had a look at the Bath University experiments on retaining walls: “Investigation of bulging, bursting and toppling in dry-stone retaining walls” (C. Mundell, P. F. McCombie, A. Heath, J. Harkness and P. Walker). Buried in there was a note to changes in the quality of the build. The original extremely well built wall acted as a monolith and proved very difficult to destroy. Subsequent, looser, builds bulged and collapsed relatively easily. The looser build included a slacker face, poorer internal fits and less hearting. The overall change in volume of stone and hence increase in air (gaps) was quite low. They were not looking specifically at hearting, and (from this articles perspective) it would have been interesting for them to have repeated their experiments varying the fill. Whilst it’s not possible be entirely scientific about this, it is not completely unreasonable to infer from the article that a relatively small reduction in the amount of hearting (and hence the tightness of its packing) makes a disproportionate difference to a walls stability. I asked Chris Mundell specifically about this and he told me that they understood that the limestone bound well and that “sliding of courses is not generally an issue, it’s more the rotation of individual blocks which is important.” Basically the looser the build, the more “stones within the wall can turn about and rock in response to any loads applied…” It should be obvious, the better we pack a wall, the less likely the face stones are to move (all other things being equal). Chris also explained that they encouraged movement “by getting the masons to use much smaller stones, so that the wall was made up of smaller elements, and not big plate-like slabs.” Whilst Chris is applying this to the build as a whole it gets back to the idea that the fewer the moving parts (all other things being equal – such as the amount of air space) the less potential there is for movement. Just a small increase in attention to detail could make a disproportionate difference to a wall’s longevity.