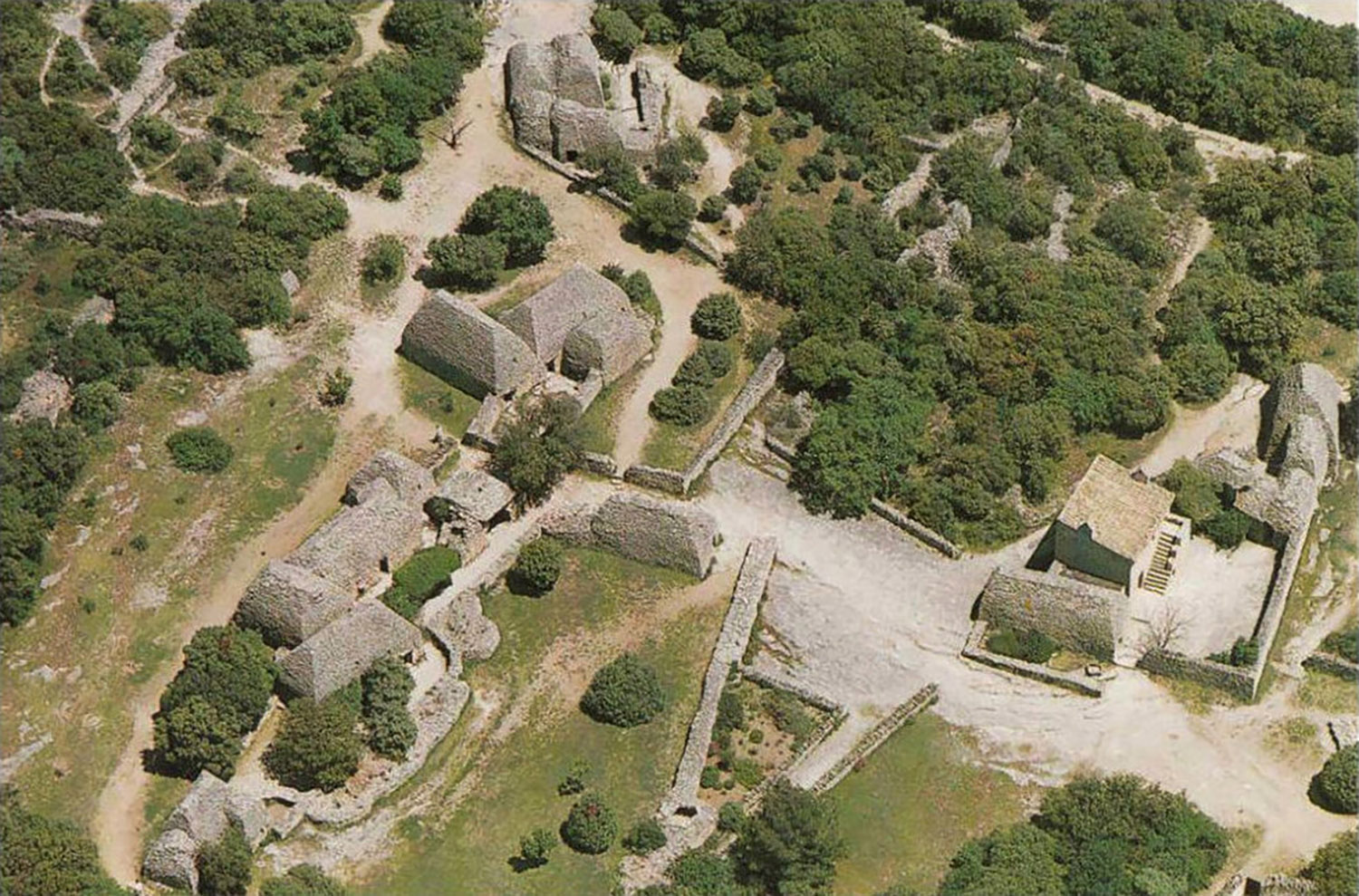 Text and photos by Christian Lassure

Postcard of the 1980s affording a bird’s eye view of the site (from the author’s personal collection).

Under the touristic name of “Village des Bories” there exists, 1.5 km West of the Provençal village of Gordes, in the Vaucluse département, an outlying hamlet comprised of 20 or so dry stone (mortarless) huts that have been for over three decades the exhibits of an open air museum.

Location
These huts, which were once agricultural outhouses used on a seasonal basis, stand on a hill at an average altitude of 270-275 metres, between the Sénancole stream – its border to the West – and the Gamache vale – its border to the East, in what the Gordes villagers call the “garrigue” (scrubland) or “montagne” (the hills).

Designations
In the 1809 land map, the hamlet is referred to as “hameau des Savournins”, a designation which is abridged to “Les Savournins” in the 1956 land map. In local parlance, it was still called “Les cabanes” (the huts) in the late 1970s. Its modern, museological name was coined by Pierre Viala, the site’s discoverer, owner and restorer at the time.

Plan of the area in the 1809 land map. © Chistian Lassure

The word “Borie” originates from an C18th. place name – “Les Borrys”, in the Bouches-du-Rhône département – that was mistakenly construed as meaning “dry stone hut” by a mid-C19th scholar. In the 1809 land register, the dry stone huts are referred to as “cabane” (when intact and still in use) and “sol de cabane” (when deserted and derelict).

History
The emergence of the outlying hamlet of “Les Savournins” dates back to a wide scale campaign of land clearing and cultivation that took place in C18th Provence, following a 1766 royal edict. The rush to the hills resulted in masses of stones being extracted from the ground to make way for new fields complete with dry stone walls and huts. The potsherds found in the huts and fields during the restoration wok of the 1970s are characteristic of the earthenware manufactured in the Apt, Vaucluse, region in the 18th-19th centuries.

Building Material
The huts were built using locally extracted, 10 to 15cm-thick, limestone slabs, going by the name of “lauses” or “clapes”.

Structure and Form
Out of the 28 stone buildings still extant on the site, – 20 belong to the so-called “Gordoise nave”, i.e. a rectangular or trapezoid edifice in the form of an upturned keel, either free standing or abutting on another edifice, – 3 have a rectangular or square plan, with a corbelled vault in the form of a cupola or a half dome, – 2 have a semi-circular vault of voussoirs as well as a cupolashaped vault of voussoirs (the two oven houses with their ovens), – 2 have a circular or horse-shoeshaped plan (ruined buildings), – 1 is a conventional first-floor house under a one-sided roof of canal tiles.

The prevalence of the “Gordoise nave”, together with the use of mortarless masonry, lends the hamlet a certain architectural unity.

The crumbling façade of a “Gordoise nave” reveals the vertical structure of its side walls, ie two facings of outwardly slanted slabs laid as headers, with in between the occasional packing of small stones. © Chistian Lassure

The Buildings’ Layout and Functions

The “Village des Bories” comprises several “groups” of cabanes which are distributed across the areas North and South of a lane that runs through the site. A “group” is to be seen as a reunion of two or more edifices, either abutting against, or adjoining, one another, or in close proximity, usually round a small yard. It would be wrong, however, to think that each group belonged to a different family. A study of the Napoleonic and modern land registers has shown that some groups did belong to two separate owners or that the same person could own one building in a group and another building in another group.

The northern half of the museological site as seen from a former threshing floor. © Dominique Repérant

The site also contains two threshing yards but no wells or water storage tanks (the nearest well, 100 metres way from the centre of the grouping, is dry).

Witnesses To Provençal Agricultural History
Based on an analysis of the buildings’ functions, the evidence provided by both land registers, the testimonies of Gordes villagers, and vestigial tree stumps, cereals (wheat, rye) were grown in the area in the 19th century, along with olive, almond and mulberry trees (the latter for silkworm rearing) and vines. There was also a cottage industry of leather sole making. Also, some of the stone huts may have belonged to people living in a nearby village other than Gordes, a pattern that was not uncommon in the Provence of old.
The site was listed as a historic monument in 1976 and has been open to visitors for a fee ever since. Its current owner and manager is the Gordes municipality.
Christian Lassure

Our thanks to Christian Lassure. for giving us permission to republish the article which was published in Issue No.22 of Stonechat (Autumn 2010).

This article was first published in Stonechat 22, Autumn 2010