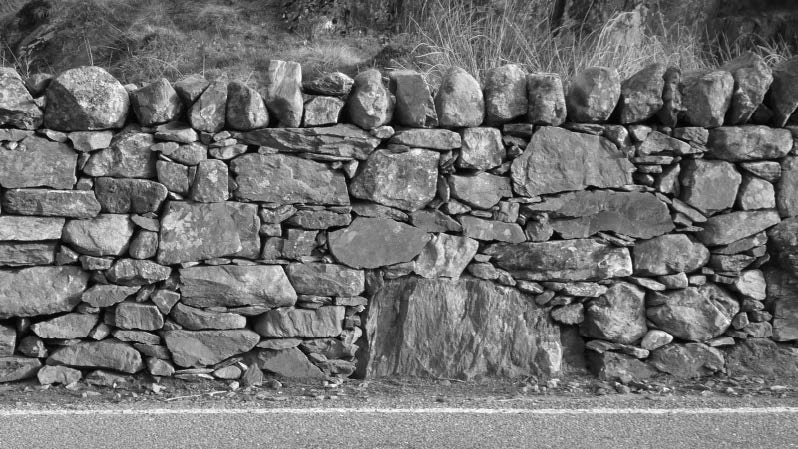 This Master Class article originally appeared in the Summer 2012 issue of Stonechat, produced by the North Wales Branch of the Dry Stone Walling Association of Great Britain.  This entire issue of Stonechat, and many more, are available at http://www.dswales.org.uk/Stonechat.html

There is probably no such thing as a perfect wall, it will almost inevitably be possible to at least theoretically improve on something. There are so many things that you are trying to achieve with each stone that something has to give. In a recent competition the winner, probably the best waller I have seen, produced his usual amazingly tight wall, hardly a gap anywhere. His wall looked the best, probably was the best but how was that tightness achieved. There were a couple of plumb joints and quite a few stepped ones. In terms of overlapping, sitting 1 on 2 and the theoretical ½ on ½, he was in my opinion possibly only third, doesn’t mean that overall he didn’t deserve to win, but how much tighter could other competitors walls have been if they had concentrated less on jointing? It is also possible that better internal stone contact meant worse face contact. So all the walls had faults, just different ones in different combinations.

Inevitably a wall has faults, being a better waller involves reducing these faults, and not compounding those that are made. This not only involves recognising faults but also means realising how what you are doing at any given point will affect what is likely to happen further down the line and how many problems are actually inter-related such as how stone section and grading can affect jointing, or how poor grading can become what is in effect a self-fueled inevitability.

The wall left probably illustrates a complete lack of planning and forethought (and probably a failure to grasp basic principles). Pins, plates, joints, poor grading and stone selection. Deciding where to begin with this sort of analysis is a bit of a problem. Essentially I will be trying to look at a small number of faults and problems and how they interact for example principle 1 might on principle 2, principle 2 might on principle 3 whilst 3 might interact with 1 in a way unrelated to 2. It could get complicated, jump around, and fly off at tangents. Do I hear you saying “what’s new there then”. I’m going to start with stone selection and more particularly in the first instant grading.

Many of the concepts such as grading should be familiar to the readership, however I shall define each of them as they arise so we know exactly what I’m talking about in this instance. Grading is the ordering of stone according to size. Basically stone size should decrease with height up the wall (there are exceptions/variations – such as slate as (see Masterclass Slate part 1 in Stonechat 8 for pointers as to why) which I’m not going to deal with here-in , we’ll stick to basic principles). Beyond the fact that large stones placed high in a wall might contravene H&S they also leave relatively little space to build the opposite face especially if placed long axis in. In addition smaller stones placed towards the bottom are more likely to become displaced. Generally larger stones set on top of a layer or two of smaller stones is vulnerable and unstable, and even where it appears stable the wall as a whole is unlikely to be as stable as it would be if a layer or two of small stones was sitting on top of larger stone. In terms of settlement and movement the more stones lower in the wall the greater the potential for collapse. A little movement in the bottom can translate to more movement towards the the top, if you had fewer stones in the bottom there would be less potential for movement higher up, and all other things being equal less chance of collapse. In amongst all this is the problem of ‘1 on 3’ which is one of those concepts that will keep arising in this analysis, it can be seen in the photo above that a large stone sitting on smaller stones will often be sitting on more than 2 by the very nature of things. It is perhaps ironic that the stone distribution is so poor in this example that the problem does not occur as often for 1 or two large stones very high in the wall as it would for one or two placed very high in an otherwise well graded wall. To some extent the better you grade a wall the bigger the individual problem posed by stone(s) placed out of sequence. As to the ‘1 on 3’ side of things we’ll return to that later.

It should be obvious in the example shown that the grading is (diplomatically) far from ideal. That said the largest stone in this stretch is actually in the base. Not always the case with this wall, in case you think I’m being facetious I add the photo taken further along the wall from the original, which is so extreme that it’s probably doesn’t illustrate very much other than a complete absence of logical thought. Back to the original 20 example given the available stone the use of small stone immediately to the left of the large foundation stone is hardly ideal.

It would have been better to use some of the larger stone and reduce the stack alongside the big footing, that much should be obvious, but why might it be a problem/ have other knock on effects. The answer to this is hidden away or at least alluded to in Random Walling part 2 in Stonechat 18.

If you have 3 or 4 large stones in a section of wall then it might seem obvious to match one big one alongside another, and maybe another. You then get all your big stones next to each other. Whilst not necessarily criminal this can have a similar effect along as poor grading up – sooner or later you have a section of wall which has fewer big stones and so more moving parts and more scope for settlement. All other things being equal it is better to spread big stones. However, things aren’t equal so it might be appropriate to place one large stone next to another and only have a small stack either side of them, rather than separating them and effectively doubling the stacks. It will depend on the individual situation and the stone.

Let’s assume we compromise and put two of our 4 large stones next to each other, and manage to get one of the other two in a little way along. Being human we end up leaving the fourth stone out of this layer as we can’t be bothered to move it far, what then?