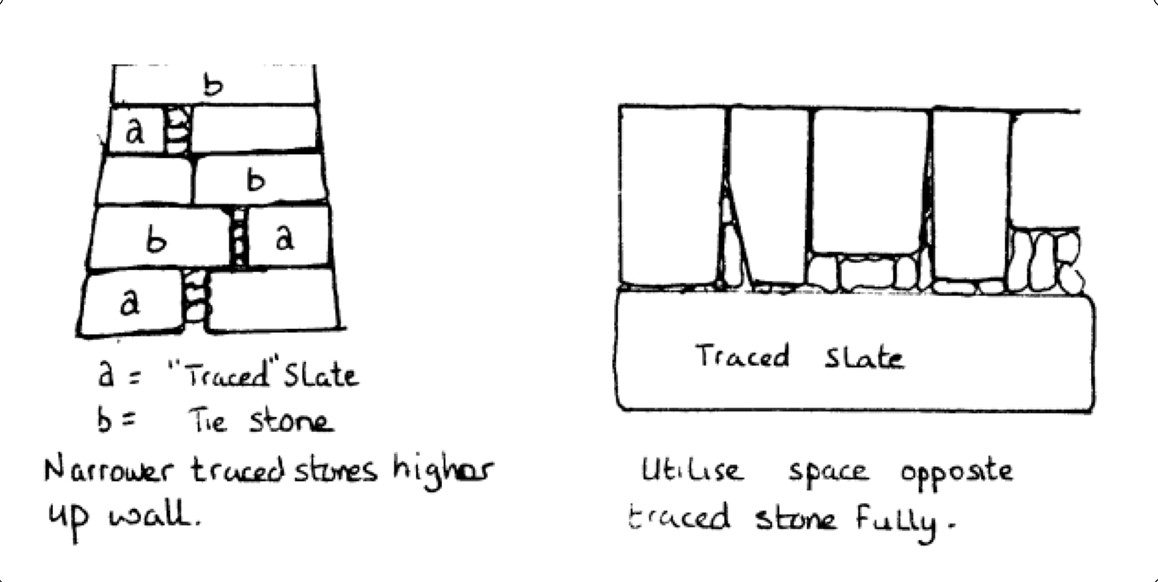 This Master Class article originally appeared in the March 1995 issue of Stonechat, produced by the North Wales Branch of the Dry Stone Walling Association of Great Britain.  This entire issue of Stonechat, and many more, are available at http://www.dswales.org.uk/Stonechat.html

Working with slate is not my favourite type of walling. Those not familiar with this specific walling medium seem to think that it should be easy nice flat brick shaped stones… This is of course far from the truth, nothing in walling is that straightforward.

To start with slate doesn’t fall into any single category. Just as we can distinguish between different rock types, slate comes in a variety of guises. I had a browse through “The Geology of Snowdonia and Llyn” (B.Roberts, 1979) prior to writing this. The section ‘The Cambrian of the Slate Belt’ starts “It will be recalled that the Cambrian succession is taken to begin with the first conglomerate at the top of the Arvonian volcanic succession at Llyn Padarn (Llanberis) and Bangor. At Pa darn, the conglomerate is succeeded immediately by a rather varied succession of ignimbrites, air tail tails and agglomerates, conglomerates, sandstones and slates. At Bangor, the basal conglomerate is disconformable upon the Arvonian volcanic rocks.” (p.9).

I don’t know about you, but I’m not quite certain what this means. I mention this because for the next few issues ‘Master Class’ is going to be looking at walling with different stone types. These stone types are categorised according to the ‘Adcockian’ classification system and the distinctions within this are hardly scientific, I make no apologies for the fact that I’m no geologist. I know that you get inter alia blue, green and grey slates, but I’ve no idea how they differ or why. So for the purposes of this article I have identified 3 sub-categories for slate namely: cut slate: slate waste; dressed slate.

I seem to remember something about mudstones and shales being related to slate. I tried to check this in ‘The Geology’ but got very confused when I discovered that: “The greywacke/shale formation is overlain by the Multfran, or Manganese Beds which consist of manganese – rich shales, mudstones and greywacke”’ – surely greywacke is a variety of duck?!! I am however pretty certain that shales and mudstones, like slate, are laminates (i.e. composed of layers and hence can usually be split). Experience tells me that working with shale has certain similarities to working with slate (well at least compared with granite boulders) and hence I will also deal with it here. At this point it should he noted that according to the ‘Adcockian’ classification system if it splits and isn’t obviously slate, it must be shale.

So what do I mean by cut, waste and dressed?

Cut slate is the regular looking slate you see with nice flat, smooth faces. Slate waste is the irregular shaped stuff (nice technical tern “stuff” and of course in no way related to the geological tuffs of which it is merely an anagram ) and rarely has a smooth face (the stone for wails built of this is often quarried from a small local outcrop specifically for building the wall). Dressed slate is anything that doesn’t fit the other two categories it is normally more regular than slate waste and tends to have a flattish face although this is not normally smooth, i.e. it appears to have been roughly dressed with a hammer.

There are a number ot considerations common to all these groupings and I shall deal with these first.

The nature of slate i.e. such that you are often confronted with very long stones which you have no option other than to trace that is run their long axis along the length of the wall rather than into the wall. Whist this is largely unavoidable a number of principles can he applied which will limit the weaknesses caused by this method.

At this point it is worth mentioning that care has to be taken when placing these stones to ensure they sit level. A three foot long slate which slopes only an inch along its face sticks out like a sore thumb if the rest of the wall is built level. and if every slate is sat so that its lace is following a slightly different level to its neighbours the end result looks horrific. Beyond looks it is important structurally, stones should be set to a true level and elate walls are structurally unsound enough as it is without anything adding to it.

As with most walls in North Wales slate walls tend to he built without many throughstones, unlike many other rock types there is no excuse for putting up slate walls the same way. There are normally more than enough suitable stones which can be used (perhaps less certainly with cut slate. especially those stones which are really far too narrow to be traced. The method I normally employ for these walls is the ‘English Method’ of levelling the wall off and placing the throughs at regular intervals, if they are too long I trim them to length rather than leave them protruding. This differs from the no mal Welsh practice of placing them at wherever they will fit without trimming. As slate has to be traced I feel it is important to keep things regular to increase its structural integrity. I would also employ more courses of these throughstones than in a normal wall, and place them at centres of 80-90cm rather than the recommended 1m. For example a wall 1m. high (plus coping), would have 2 courses at around 30 & 60cm ratter than just one at around 50cm. If the wall was over a metre high (plus coping) another course would go in at around 90cm, and so on. A wall I repaired in Bethesda last summer had four courses in total, it was just over 22m long and 1.5m high plus coping When I dismantled it there were literally only 2 or 3 throughs it ended up with over 100. Hopefully this will compensate for the large number of traced stones.

Stripping out slate walls also differs subtly from other walls as the size of the face is not all important in grading the stone. Tie stone needs to be sorted to take into consideration the depth of stone that will he in the wall. Some thinner slabs will prove too long if caved for higher up the wall and will need to be used early on if they are to be built around, some thicker stones are too narrow to lie used lower in the wall. I tend to sort the stone in two stages. After leaving a gap between the wall and the stone the first section between this and  the coping will be comprised of those slabs which are going to be traced, graded more or less according to depth of stone that will run into the wall, between this and the coping I would sort the rest of the stone as per a normal wall. As for the hearting, all the larger hearting would be carted as building stone as employing so many more throughs reduces the amount of building stone available. but also reduces the amount of hearting required. I also sort the hearting into two distinct types larger bits and completely disintegrated rubbish. Slate tends to disintegrate into flakes so there is always plenty of this and if you do not distinguish between the two types of hearting everything will become engulfed by the smaller rubbish and inevitably too much of this will be used for hearting the lower part of the wall. Throughout the stripping process care has to be taken as the stones will shatter if flung about willy-nilly.

That’s the similarities just about dealt with in the next edition we’ll have a look at some of the techniques specific to each grouping and have a look at where shales fit into all of this.