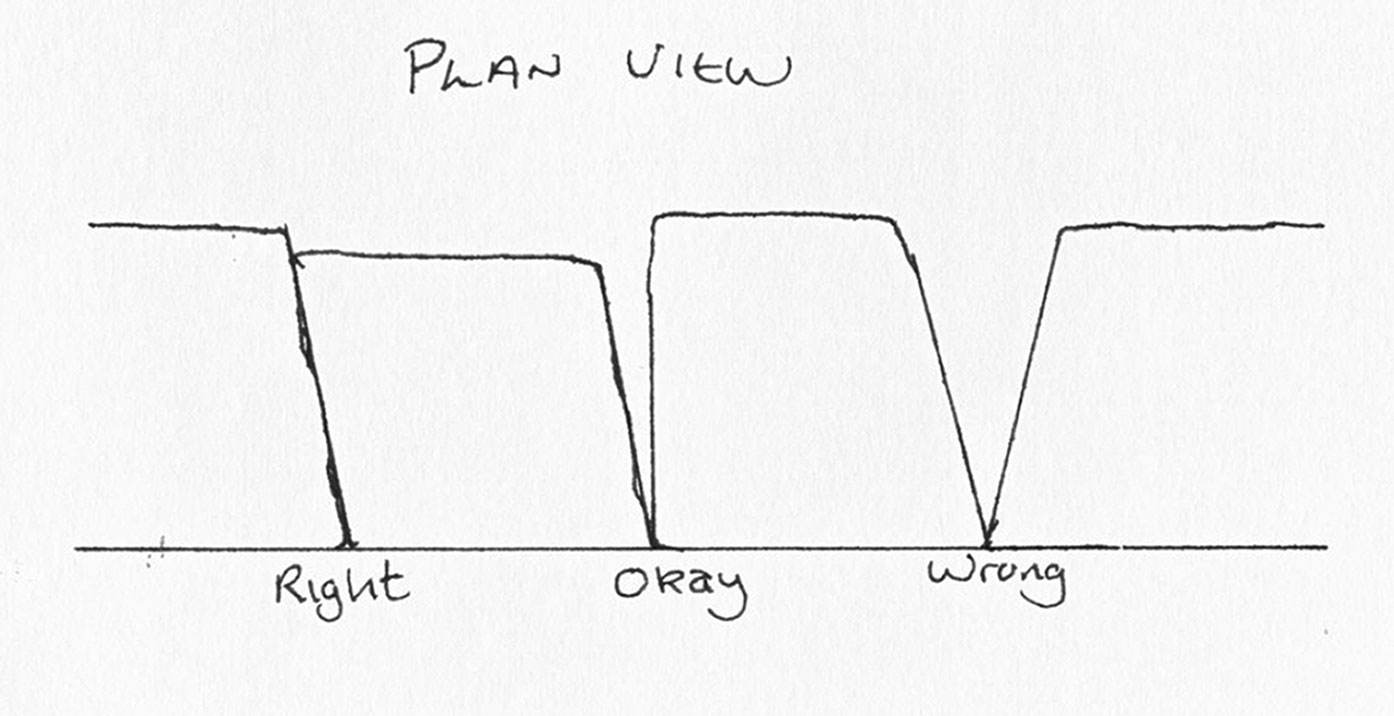 This Master Class article originally appeared in the June 1995 issue of Stonechat, produced by the North Wales Branch of the Dry Stone Walling Association of Great Britain.  This entire issue of Stonechat, and many more, are available at http://www.dswales.org.uk/Stonechat.html

In the last issue of “Stonechat” we looked at the similarities in approach to working with different types of slate. In this article we look at the methods employed in, and differences between, building with cut slate and slate waste.

These can be found following either coursed or random patterns. Here I will only give passing mention to coursed walling as at some future date I will be tackling this method of walling in more general detail.

Working with cut (sawn) slate is not as easy as it looks. The stones are not always as regular as they appear, often tapering slightly from one end to the other so that when you place a stone on top of them it slopes horribly.

The ideal solution is to find another stone with an inverse slope to place on top thus cancelling out the difference. Fine in theory but in practice reliant more on luck than judgement. The alternative is to find a sliver which is tapered and can be used to level off the slope, if this sliver is not tapered an undesirable gap will be left below the next building stone. Failing in either method you are stuck with a sloping stone, the next stone on top of this will follow this slope and hence the problem will persist.

Unfortunately there is no miracle cure to this problem, in fact with coursed cut slate walls the coursing is often wavy as dictated by the nature of the stone and not necessarily sloppy workmanship.

You need to take care when matching adjacent stones for height in both coursed and random work. If they do not match exactly then it is impossible to place a stone on top of them, everything you have is more or less flat and hence small irregularities cannot be accommodated. One solution is to employ thin levelling stones, and whilst not unacceptable you need to take care not to end up with a wall where these are liberally sprinkled throughout the face.  With care you should be able to avoid an over-proliferation of them and with random work in particular ensuring steps between stones of 1” or more can virtually remove the need for particularly thin levelling stones.

Another solution would be to split the larger stone to size so that it matches the height of its neighbour. This does not necessarily work particularly well. A chisel is fairly essential and used to split the slate at three or four inch intervals along the desired cleave line. Unfortunately slate blocks don’t seem to split very well if you are attempting to take off less than ½”, rather the slate flakes at the edges and you can’t continue the cleaving across the whole surface of the block which will still be proud of its neighbour and hence the problem remains. Splitting off larger amounts works well, but then if it’s a larger amount the need for a thin levelling stone doesn’t exist and there was probably little need to split the stone anyway. Consequently you shouldn’t really be splitting that many stones, and the risk in splitting too many is that you will end up using an excessive amount of thin (fragile) stone to regain the finished height with the stone available. Take care and get it right without splitting or levelling, at times it seems nigh on impossible, but it isn’t.

One of the nice things about working with cut slate can be the nice flat ends of the stones, especially where the slate is brick like. Getting stones to butt together tightly can be oh so simple. Fortunately this seems to be the norm, if the end of the slate is angled then you have to find a matching angled stone to be its neighbour or more normally use the stone with the angle tapering into the wall and avoid using two pointed stones next to each other (as detailed in “Stonechat’. June i994.

One other solution to this minor problem is to have a Stihl stonecutter or similar tool handy – and a rich client!

Care needs to be taken when working with blocks to ensure that you bridge joints sufficiently in order to avoid creating a virtual running joint. Another problem exists in achieving an even batter without having to leave steps in the face of the wall. Blocky stone walls tend to be built more vertically than is the norm for this very reason. This and more dealing with blocky stone will form the basis for a future “Master Class”.

In my opinion amongst the most difficult of stone types to produce a good looking end result with. Irregular faces, stones which refuse to butt together properly, small gaps, thin wedges, lots of long traced stones- where stones with parallel bedding planes seem to be the exception to the rule. Stones with slightly domed bedding planes, even flattened, elongated “S’s” are not uncommon and believe me triangular slates do exist. Damage limitation is often the norm.

Of course it isn’t all quite so straightforward, especially where you are placing larger (or tracing longer) slates on top of three or more stones in the previous ‘course’. Frequently the irregularities mean that they refuse to sit on every stone under them even when you have taken the effort to provide a nice level bed. In fact the problem normally lies in the fact that you’ve provided a nice level bed. It might be what you are theoretically supposed to do, unfortunately as is often the case, it doesn’t always make life easy. The ideal solution is to try and build an uneven surface for these stones to sit on, bearing in mind that once they are in place their orientation should follow a true level and not slope up or down along their overall length. Again this is easier said than done and I would defy virtually anyone to build the wall to accommodate these irregularities in every instance.

So what can you do? Well at the risk of being ostracised by the ranks of fellow Master Craftsmen, I believe that at times there is little choice other than to jam stones in from the front. A cardinal sin this may be but I wait for a suitable alternative to be put forward. You can spend forever putting a slab on, examining a gap, removing the slab, filling the gap, putting the slab on and then it is no longer sitting firmly on one of the other stones under it.

Cheating it might be but there is still a right arid a wrong way, or perhaps a less bad and a disastrous way. The stone to be jammed in place should run as far into the wall as is practically feasible. It is not possible to actually quantify this, although anything less than 6 could certainly be regarded as skimping. The stone should also be slightly thicker than the gap, but only just. Again this is not quantifiable, although we are probably talking in terms of around an eighth of an inch or less. If the stone is too small then it will wobble around in the gap if it is too big it will either shatter under the force required to try to knock it in if you can get it in at all, or it will lift the stone so that it is no longer sitting securely on the other stones. Once this stone is in place and tight it is important to check that the rest of the stones below the slab are tight, if they are not do not continue the process, remove the slab and start again.

Before anyone says ‘what about filling these gaps from the inside of the wall’ I would like to make the following observations. Yes this would be the preferred method fine in theory but not always possible in practice with slate. Here you are dealing with gaps below a stone which runs into the wall by probably around 8-12”, the gap in question is probably less than 3/4“ (and more likely less than ½”), getting your fingers into the gap is one thing, getting a stone to be a very tight fit is another. The two combined can be virtually impossible and surely the outlined method is preferable to leaving a gap or having loose stones. As long as the stones jammed into place run a good distance into the wall, everything is tight and all gaps beneath the stone are filled, you should have a solid long lasting wall. Just avoid doing it all the time, preferably only using this method as a last resort.

Unlike cut slate the ends of slate waste tend to be nastily sloping, irregular, mis-shapen abominations. They hardly ever seem to butt together in a way that gives a neat finish, this doesn’t matter as long as they are butting together. I have mentioned that stones should butt together into the wall for as much of their length as is possible (“Stonechat” ,March i994). With slate this might mean only an inch or two where the ends are misshapen. In these instances the stones should be dressed to give a better fit.

Slate waste breaks/dresses relatively easily. The only problem is that it tends to shatter or split along its bedding planes more than you want it to. The key is to chip little and often trying to take off an inch at a time rather than 3 or 4 inches. It is useful to find a square edged stone and place the stone you wish to dress on this with the point you want to dress it to on the edge of the square stone. Then you put weight on the stone close to the desired point you want to dress it to (kneel on it or place a boot on it) and chip away to your hearts content.

Well that’s about all I can think of for now. Next time we’ll have a look at dressed slate, and what the similarities and differences working with shale presents.