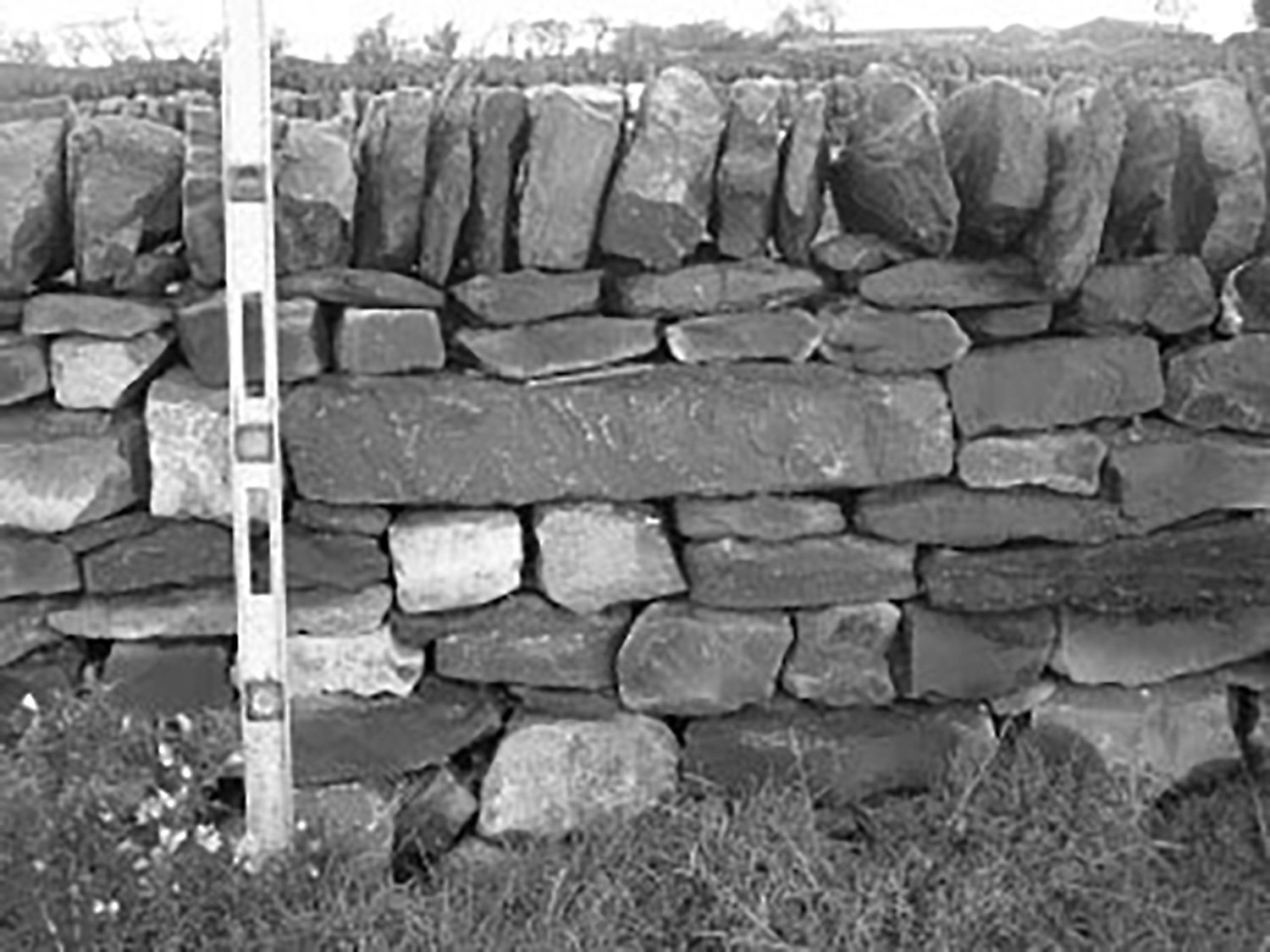 This Master Class article originally appeared in the Winter 2007 issue of Stonechat, produced by the North Wales Branch of the Dry Stone Walling Association of Great Brittan.

Current Stone Chat issues are sent to all Stone Trust Members as a member benefit.  Click here to become a member.

Tracing is the practice of placing a stone with its longest axis running parallel to the face of the wall rather than into the wall. It is generally accepted that tracing is a poor practice as placing stones with their longest axis into the wall greatly reduces their potential to become displaced during settlement.  It is possible to further qualify this idea. For example narrow traced stones are particularly easily dislodged; traced stones lower in the wall tend to be more of a weakness than those higher up as there are more forces trying to displace them. In addition we need to note that with some stone types, most notably laminates such as slate, tracing can be unavoidable. Such walls therefore require a specialized structure. Tracing stones can be a fast method of walling (i.e. fewer stones are required per meter of face). And hence is a particular preference of the yee-haa tendency.

As I noted in a previous “Masterclass” dealing with walling with slate (this will be available on-line somewhere within www.dry-stone.co.uk at an unspecified date in the future!!) within most walls the tracing of occasional stones is acceptable, although the grouping of traced stones alongside each other or on top of each other can create a weakness as can a proliferation of traced stones sprinkled liberally throughout the wall.

It is this factor which tends to cause complications with peoples` concepts, as in some regions “tracing” is more acceptable than others. For example wallers from the North East of England argue that as long as stones run a 1/3 or more into the wall or do not span more than two stones (along the length of the face) they are acceptable.

This of course started me thinking…

All other things being equal a stone will be more stable and hence a wall stronger if it is placed length in. Unfortunately with walling all other things are never equal, and for every hard and fast rule exceptions can invariably be found. Even cardinal rules such as `no running joints`, `batter the wall` in do not always hold true. In The Waller and Dyker, Spring 2004, I showed a wall in Cwm Ystradllyn (left) “well over 100 years old the wall overhangs its base by around 1.5m, without a stone being out of place”. Part of the ramparts of Tre`r Ceiri an Iron age hill fort on the Llyn Peninsula in North Wales, dating back more than 2millennia (its about the oldest free-standing stone structure in Britain) has 2 meter
“running joints” in a 3 meter high wall. Evidence suggests the stone either side of the joints run several feet into the walls. The wall in Cwm Ystradllyn works “through the use of massive (up to 2.5 m long) corbelled slate slabs.” So both these examples as well as illustrating that cardinal rules do not always hold true also illustrate what can be achieved (got away with!) if the stones are not traced.

With irregular, rounded and smaller stone it should be fairly obvious that many of the stones are particularly unstable if traced, however more regular stones (e.g. level bedded sandstones, oolitic limestone) with the same `footprint` (i.e. basic basal dimensions) are likely to sit more securely if traced. It seems fair to conclude that it is less of a crime to trace these. Even so it should be remembered that it is a basic scientific principle that even if they are not unstable they would be even MORE stable if placed length in.

This brings us to the next complication. If, for example, a stone`s longest axis is 60cm long and the wall is 75cm wide placing it length in would result in having to build a thin skin to build the second face, which is likely to result in a bigger weakness than tracing the longer stone. Here tracing might be the best approach. This in turn needs a further qualification, relating to the width of the stone. If it is narrow then rarely if ever would tracing be appropriate even though it is easy to build the second face. The stone will never be stable and if long enough is best utilized as a though, or trimmed to being a ¾ through. As to how much of the stone should be in the wall can then all become a bit academic, I certainly wouldn`t overly argue with “less than 1/3”, but it is still long axis along the wall and therefore essentially traced.

This brings us to another proviso, this time relating to the thickness/depth of the traced stone. Back to “all other things being equal” for any 2 traced stones of the same `footprint` the thinner the stone the more stable it will be. The thicker stone has a higher center of gravity and hence is `relatively` easily displaced.

It should be obvious to everyone (except the builder of the wall right in Lanfairpwll…) that tracing a stone where the height of its face is greater than than its depth into the wall (i.e “vertical tracing”) merely
compounds a fault.

Confused? Get a brick, pace it on the edge of a table (there are 6 possible ways it can be orientated, but that you`ll have to work out for yourself), tip it off seeing how much force is required each time. The easier it proves to be, the less stable that orientation. Whilst the 2 traced orientations are not the least stable, it should be fairly clear that the 2 length in are and I would hope that no-one reading this would ever vertically trace a stone on end. (Please, not even in Llanfairpwll…!!)

Tracing can be acceptable, the degree and acceptability depending on stone type and tradition. Generally a wall will be stronger if the stones are not traced and where there is “excessive” tracing of stones, particularly grouping as shown below, the longevity of the wall is likely to be highly compromised.

On Skye many basalt walls are built with some of the building stones traced and even stood on edge. Basalt is about the heaviest stone in Britain weighing in at around 3 tonnes per cubic meter (most Welsh stone types are around 2.6 tonnes per cube, oolitic limestone is only
around 2 tonnes per cube). It is generally held that their weight holds them in place. This seems quite conceivable as its much harder to displace a 56 lb weight than a piece of polystyrene of the exact same dimensions. However we are getting into the realms of engineering degrees, and as to setting them vertically now I come to think of it I`m not sure weight makes it more stable if its evenly distributed within a given stone two different types of stone of the same dimensions are going to have the same center of gravity regardless of weight, or are they?? Something else to ponder, answers on a postcard please! Unfortunately in walling “all things” are seldom equal.

Stone type and local tradition (usually related to the former) might mean that tracing to some degree is acceptable, and hence some traced stones might not be regarded as such. However they are by definition traced, but “all other things being equal” it might not matter, provided this perceived weakness is compensated for, maybe partly through the nature of the stone itself, but also through the method of construction employed – which is a whole article in itself! At this point we are in danger of going around in circles especially if we consider whether or not breaking up stone to avoid tracing is a good idea as ALL other things being equal it is possible to argue that technically the smaller the stone
the weaker the wall. Scope for yet another article.

So I shall leave the final word to Donald Gunn from Northumberland who, during some correspondence on these issues, put it rather succinctly when he said: “I think longer stones are an impediment to uniform settling, … the main issue is uniformity of construction with no rogue stones
outwith the general character of the build.”