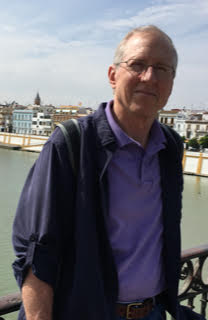 Many thanks to fellow board member Paul Peterson for interviewing David and writing this profile.

David joined the board of The Stone Trust (TST) in January 2020, having participated in a two-day introductory workshop offered by TST in 2019 at Tear Cap Workshops in Hiram, Maine.  David says he became adept at pinning large stones during the workshop walling process.

David does not make a living with stone. Instead, he brings decades of experience as an executive focused on how organizations, particularly non-profits and foundations, can achieve excellence in their structure, function, and mission impact. His presence on the board provides valuable perspectives, as TST seeks to expand its operations while continuing to improve the quality of the materials and courses offered to both professional wallers and the general public.

David grew up in upstate New York and earned undergraduate and graduate degrees in public administration.  After working with numerous educational organizations, including Cornell, Virginia Commonwealth University, and the Colonial Williamsburg Foundation, David accepted an offer to work with the Dana-Farber Cancer Institute in Boston in 1987.  Over the next decade David’s guidance on senior level management issues was instrumental in helping to make Dana- Farber one of the most successful and admired non-profit institutions in the country.  More recently, David worked with a private foundation established by Dean Kamen, inventor of the Segway and holder of over 1,000 patents. Kamen’s foundation hosts robotic competitions for high school students all over the world, culminating in a world championship event each year that draws over 20,000 high school students and their mentors. David was CEO and worked closely with Dean to pursue the foundation’s mission.

For the last fifteen years, David has teamed up with his wife Pam to provide consulting services to large foundations and individuals who are seeking opportunities for targeted philanthropy, or, as David describes it, “They want to give their money away to entities that are high quality and high impact organizations.” David believes that TST is on its way to becoming such an organization. “The Trust already has the key indicators of a high quality, high impact non-profit: outstanding programs, excellent leadership at both the board and staff level, a clear focus on its core mission, and a resistance to chasing rainbows.”

David offered to join the board to share his experiences and expertise as TST moves into its second decade. He believes that TST is well positioned to pursue its mission to preserve the professional craft of dry stone walling and expand its appeal to the general public. Given recent events, David is particularly interested in adding distance learning options to TST curriculum. The board is fortunate to have a person of David’s experience available as the organization faces the twin challenges of expanding operations while maintaining the excellence if its instruction and certification programs.