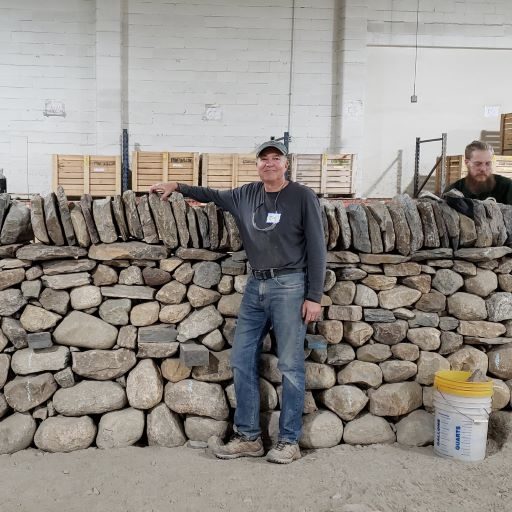 Jim in front of his successfully completed test stint,

at the Contractors Intensive in March 2020.

We would like to introduce you to Jim Wood, one of our newest board members who lives on the West Coast in Northern California. A lifelong resident of California, Jim grew up in Orange County during a period of significant urbanization of the region.  Jim witnessed the rapid conversion of a rural region with farms and orchards into one vast continuous megalopolis. Based on the changes he and his wife observed in the quality of life living in the densely developed LA basin, they abandoned the urban environment for the rural foothills of the Sierra Nevada Mountains northeast of Sacramento where they still live today.

From a young age, Jim had a keen interest in nature and science. In university he first studied earth science and environmental studies leading to a BSc degree in that topic. This education introduced him to fundamental concepts of earth and biological systems, ecology and natural resource sustainability. It has led him to critically evaluate and question man’s impact on natural ecosystems and the irreversible changes that have occurred to the natural world in modern Western society.

After graduation his first career role was working at a petroleum company research laboratory as a geological technician. During that time period he completed a Master’s degree in Geology at California State University at Los Angeles.  His work at the research lab led to him learning the analytical skills to study rocks at the microscopic level—their composition, structure, and how fluids such as petroleum and water move through and are stored in rock buried at great depth and under great pressure.

When Jim and his family left Southern California, they chose to relocate to the heart of the Mother Lode gold country in the Sierra Nevada quite near where gold was first discovered in California.  This move gave Jim opportunities to apply his geological skills in a number of enlightening and rewarding ways beginning with work in the geotechnical/ soil engineering consulting world. Here, Jim learned the engineering aspects of designing soil and rock aggregate materials to support building structures, roads and bridges as well as the engineering concepts of fluid movement through these artificially created rock materials. While he learned new concepts, this work also bolstered Jim’s growing cynicism of unbridled land development and its affect ravaging natural ecosystems and consuming open space.

Jim regards his most rewarding career move when he took the job as  research consultant for a Canadian gold mining company working to reopen an idle underground gold mine in the historic mining town of Grass Valley, CA. All mines and quarries produce tons of mostly unusable tailings, i.e., pulverized rock, as a residue of rock processing. There is nothing sustainable about the mining industry. Mines and quarries excavate rock to extract metals or produce aggregates while leaving huge holes in the ground and waste tailings piles across the landscape. While Jim wasn’t a great fan of the mining project, this company had the foresight to try to make their project more sustainable by investing in waste recycling technology.

In this new job role, Jim was tasked with working with a team of engineers to experiment and to develop a novel technology to recycle useless pulverized mine and quarry waste rock material (dust) to make a high quality recycled building product like floor tile. While the mine project ultimately failed, the recycled tile technology worked, and worked well. Alas, this was the time of the great building recession of the mid 2000s and capital to continue to commercialize the technology was not obtained.

Currently Jim works as a consultant to the geotechnical field.

His whole career thus far had been about “rock” but getting involved with dry stone walling through the Stone Trust introduced him to a different concept of “stone.” As he will say, “Stone is rock that has been modified in one way or another.”  In the geological process known as the rock cycle, rock is degraded by weathering and erosion which creates disorder. It’s a process that we as humans can observe in our time scale. The part of the rock cycle we can’t observe because it requires deep or geologic time is when the eroded sediment is deposited in the ocean and eventually gets transformed back into rock through metamorphic processes. Jim regards dry stone wall building as reversing the order to disorder process in the human time scale, in other words creating order from disorder.

Living on a sloped piece of property in the Sierra foothills Jim had always wanted to build his own retaining walls, but felt that if he couldn’t do it correctly, he wouldn’t do it at all. Eventually he decided he wanted to learn walling skills. So, in 2019 he discovered the Stone Trust while searching for resources online. He then signed up for the March 2020 week-long Contractors Intensive.

He arrived in Massachusetts just as the world shut down at the beginning of the pandemic.  Luckily, with proper safety protocols, the workshop went on with Michael Weitzner and Ron Neil instructing.  After the workshop, Jim was very impressed with the level of instruction and the skill sets of the trainers. He became interested in the workshop programming and began bombarding the TST Director, Amy-Louise, with thoughts for making workshop programming more effective, especially cognizant of people traveling across the entire continent to attend walling instruction on the East Coast.  Jim initially agreed to sit in the Programs Committee as a non-Board member.  After months of “cajoling and coercion,” Jim was convinced to be nominated to the Board of Directors as a representative of the West Coast.

After being introduced to dry stone walling skills, Jim applied his new found knowledge of dry stone techniques to appreciating the innumerable examples of historical dry stone walls preserved throughout the Sierra, such as along the historic emigrant wagon roads and railroad routes built in the nineteenth century. In addition, many mines and early industrial sites created during California’s rapid growth and development following the gold rush relied on dry stone building techniques prior to the advent of Portland cement and concrete. Jim is cataloguing historic dry stone structures in the region for the potential of creating a historic stone wall field trip through the Sierra, a trip to be sponsored by the Stone Trust. Such a field trip could be a segue into increasing publicity on the West Coast about the mission of the Stone Trust with hopes of ultimately creating West Coast workshop venues.

There is a great need for dry stone skills instruction on the West Coast. Currently, only people with the financial means can travel to New England to gain dry stone walling skills through the Stone Trust workshops. The West Coast offers tremendous growth opportunities to further the mission of the Stone Trust.

Many thanks to fellow board member Karen Jarret for interviewing Jim. What a good way for the Stone Trust’s five new board members to get to know each other! Thank you, Karen,