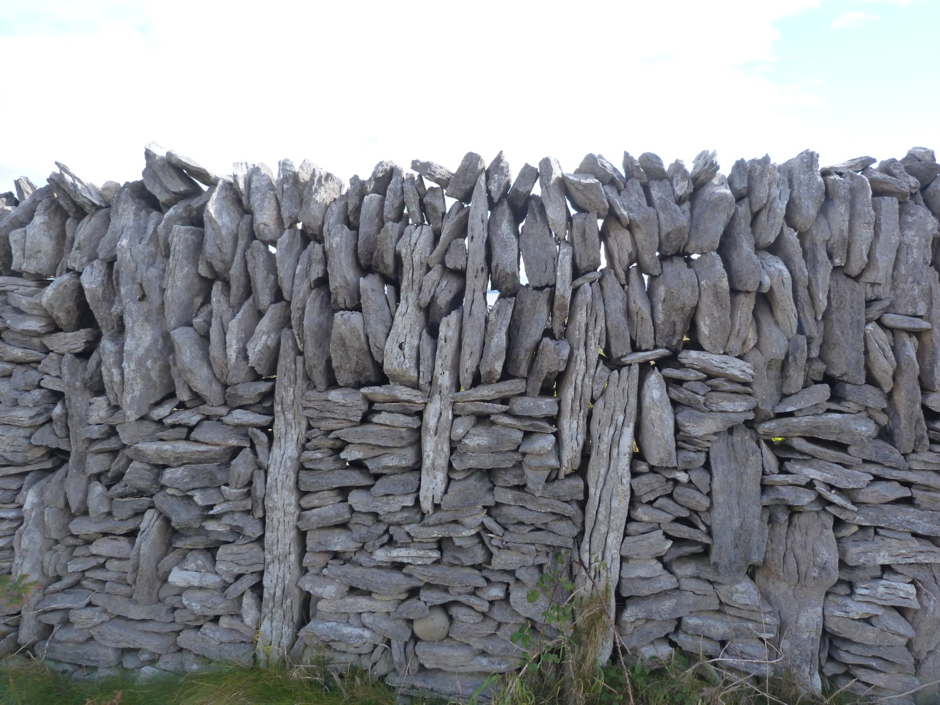 The Galloway dyke and the Feidin wall are examples of build styles which use the available stone to best effect. Typically they are not built of uniformly shaped stones; the roughest material can be used to build a very attractive wall with a good mix of texture and color. Both styles could be adapted to produce good retaining walls.

The style we know as the Galloway dyke is normally built ‘double’ to a height of about two feet with a course of coverbands on top of that. The wall is then built ‘single’, up to and including the copestones. The ‘single’ makes up a very impressive cope course, sometimes more than a couple of feet high. It overhangs the ‘double’ and was supposed to terrify sheep and deter them from attempting escape.

The image below shows a hybrid of the Galloway dyke. A surplus of large stones has been used to include sections of ‘single’ wall. A minimum of time and effort is used lifting big boulders too far off the ground or breaking them.

Note how the wall has a good level top line, even though it is made from highly irregular material.

Very often the Galloway dyke is built of large round boulders but in moorland or higher hilltops the stones might be shattered pieces of granite or schiste. This creates a wall which has some similarities to the Irish Feidin wall. It is almost certain that Irish landowners recognised the importance of proper walls and adapted the pattern to suit their own stone types.

The style we nowadays call the Feidin wall is found mainly in the limestone country on the west of Ireland. The stone comes in slabs of various sizes or small flat pieces. This produces a formidable fence guaranteed to keep livestock under control but, if the wall is damaged, it is easily repaired.

Just like the Galloway dyke the Feidin wall is built ‘double’ in the bottom and ‘single’ in the top half. Vertical stones are sometimes placed within the ‘double’. Long flat pieces are used as found; no effort is wasted breaking them up.

This section of Feidin was built by enthusiasts during a two day workshop on the island of Inis Oirr, Ireland.

This style of walling lends itself to an event where participants have varying degrees of experience, each ‘cell’ between the tall uprights can be built in a free style.