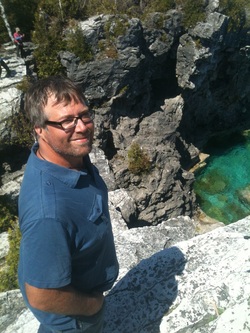 Menno Braam (Ontario), featured in The Stone Trust’s 2017 Calendar, first began working with stone in 2001. He quickly found himself drawn to its creative possibilities, and also its potential permanence. Over the years as he has developed his skills, he’s striven to maintain a balance between aesthetics and structure. His experiences so far have led to several awards, and have given him the opportunity to meet and work with some of the best master craftsmen in the world. Menno is a proud member of the Dry Stone Walling Association of Great Britain, from which he has received two levels of certification. He is also on the board of directors and a founding member of the Dry Stone Walling Association of Canada, which like the UK association, is not for profit and promotes dry stone walling standards and awareness to the public through education. His website is www.whistling-dwarf-stonework.com.