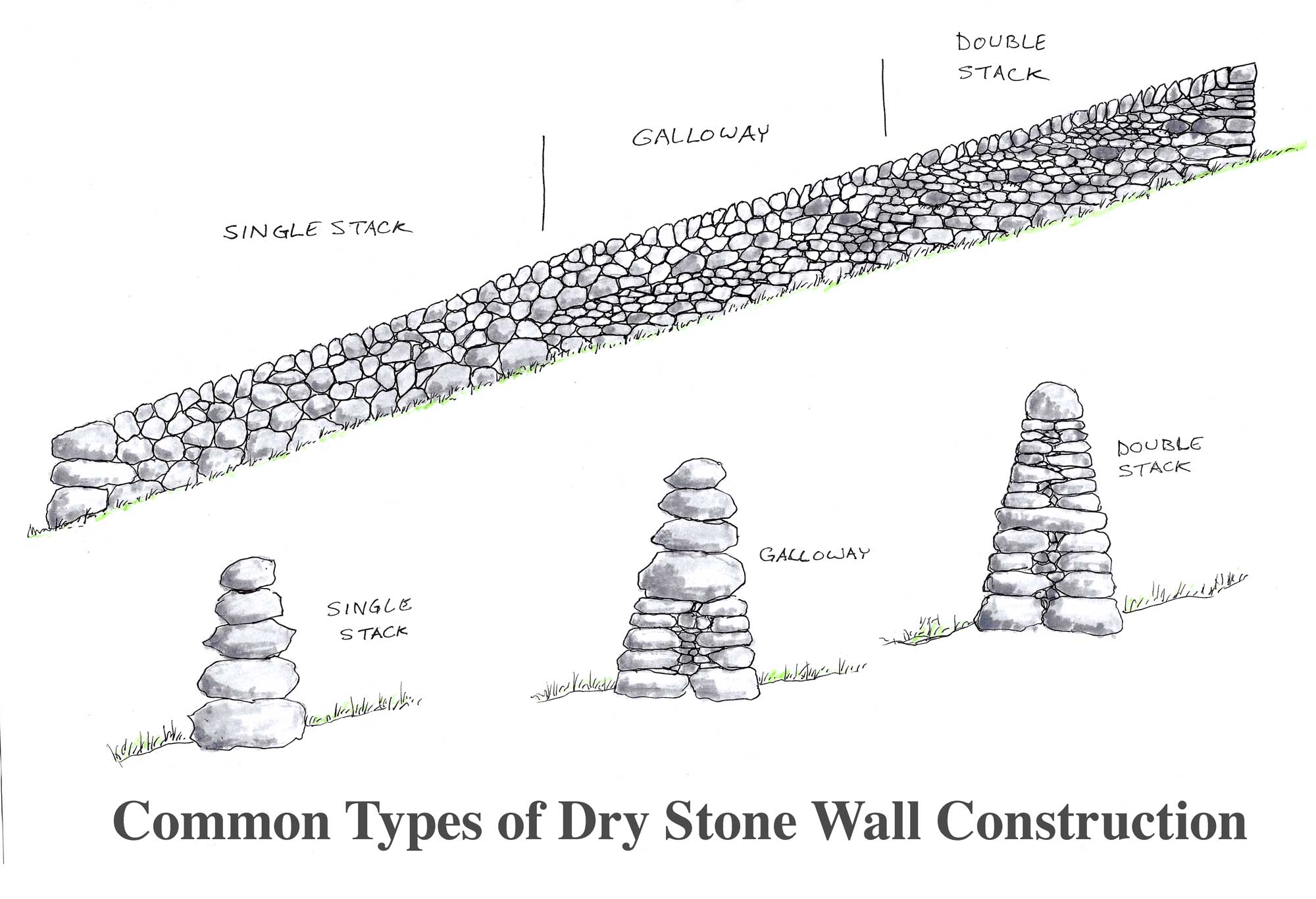 The ‘single wall’ or ‘single stack wall’ is exactly what it sounds like, a single stack of stones forming a wall.  These walls are built of large stone and are much faster to build than a double stack wall, though equipment is often needed to efficiently move stones weighing several hundred pounds each.  Single walls are not suitable for retaining walls (with a few possible exceptions).  Single walls are often called ‘lace walls’ because a lot of light is visible though them between the stones.  The thickness of a single stack wall is roughly the same as a double wall.  Visualize a wall built of through stones that get slightly shorter as the wall goes up.  Single stack walls make up the majority of old field and property boundaries in Northern New England, particularly in upland areas.   They were fast to build and many ended out being abandoned not long after.

If you are interested in learning this walling style let us know!  Currently we don’t have a single stack workshop scheduled, but taking the Galloway workshop will be very helpful to anyone looking to learn single stack walling.

The ‘Galloway Dyke‘ or ‘Galloway wall’ is named from the Galloway region of Scotland where this type of wall is the most common (Dyke is Scottish for wall).  It is the most effective way to build a wall if you have a wide range of stone sizes to work with, and a lot of large stones.  It can be substantially faster to build than a double stack wall and is very effective, and can be visually stunning for field walls and property boundaries.   Galloway walls are not appropriate for retaining walls.  Historic Galloway walls are less common than other wall types in New England, but can be found if you know what to look for.  Galloway walls often require multiple people or equipment to move heavy stones.

The key features of a Galloway Dyke:

There is a incorrect walling style which I sometimes refer to as a ‘Reverse Galloway’  where large stones are used to form a single stack lower portion of the wall and a double stack upper portion is perched precariously on top.  This is a very unstable and unsuitable way to build as the small stones in the double stack wall will forever be sliding off the large stones below.

Learn to build a Galloway Dyke on May 14 – 15th.  This is the first time a Galloway walling workshop has been offered in the US

The most common is the ‘double wall’ or ‘double stack wall’.   This is the classic type that nearly all workshops teach. It is also what is used for certification tests, and is the correct building type for retaining walls.  It is typically viewed as the strongest type of wall, though that is not always the case.  The double wall is best suited when a smooth and tidy wall face is desired.  Most new wall wall construction in the US is double stack.

Learning to build a double stack wall is fun and easy.  It is the best place to start for beginning wallers.  Click here to all the upcoming workshops at The Stone Trust

Wallers should use the walling type that best suits the available stone to maximize the efficiency of the speed of the build and use of stone.  Smashing large stones up is far more time consuming and energy intensive than building a wall type that works with the stones available.  When building new walls be sure that the stone ordered is appropriate for the specified building style.  For walls that will be mainly viewed at a distance, it can be appropriate  to recommend to clients Galloway or single stack type walls which are faster to build and thus less expensive (provided you know how to properly build them).  Remember to always avoid incorrect practices such as the ‘reverse Galloway’.  Tracing stones (long edge visible) the with any wall type is a very bad practice.